"Selfie" of Syrian activist with Mr.Erdogan raises the INDIGNATION of the Syrians 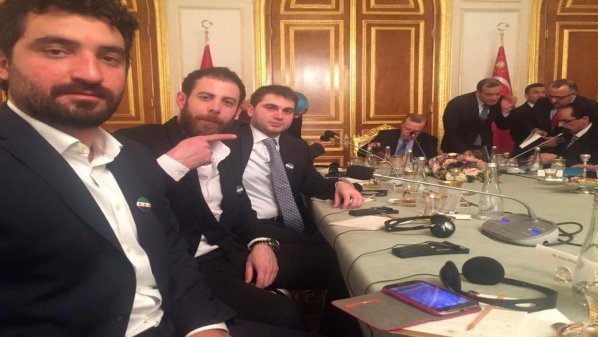 ElDorar AlShamia:
A " Selfie "published by a Syrian activist called "Rami Jarrah" with the Turkish president, Mr.Erdogan raised huge anger among Syrian activists; where they saw that deed is just disloyalty and unfaithfulness to behave in such a dishonorable way with the most honorable and influential regional country who supports the Syrian Revolution.
Activists commented in social networking sites on the photo in boiling manner; where considered that publishing such images distorts the image of activists and journalists working in the domain of the Syrian Revolution, and stressed that it is just an individual act  for its owner, objectives searching for fame, far from taking into account the interests of the Revolution or respecting himself.

“Jarrah” who is a Syrian lived in Britain recently came Syria-posted photoes on his account in "Facebook" During the meeting of a number of activists with the Turkish President in his palace, in order to talk about the difficulties and hardships faced their work and their entering the Turkish territory; these photos show “Jarrah” making such gestures and Jargonomimia, while the Turkish president who was busy signing some papers!